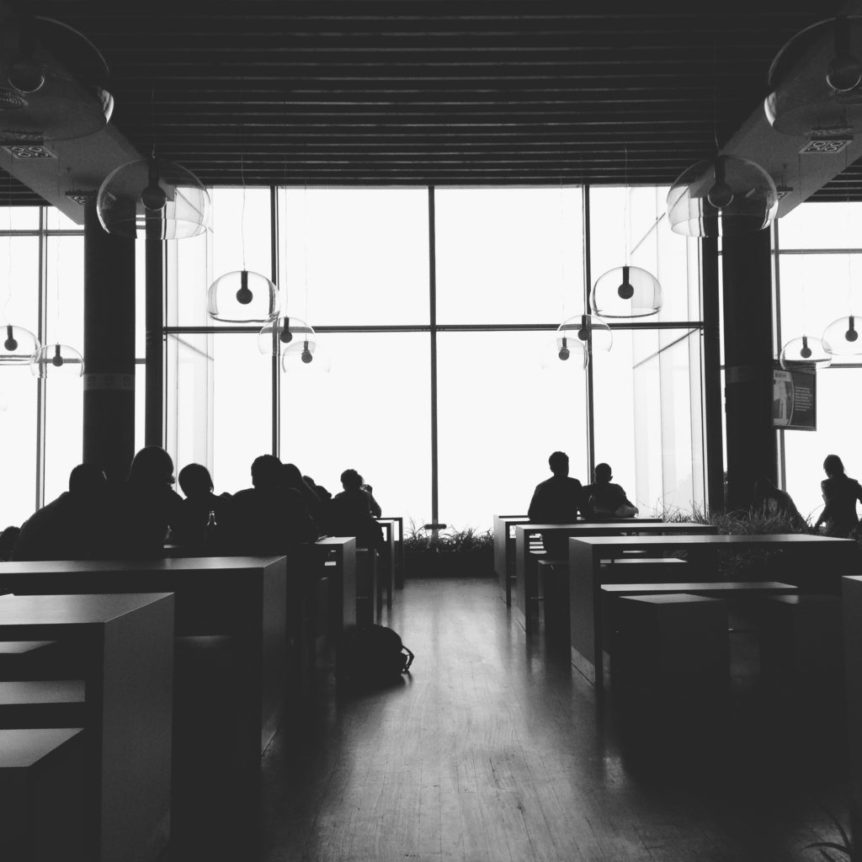 I hid my anxiety from my co-workers, but things finally reached a boiling point. This is how (and why) I told my boss about my anxiety and panic attacks:

The why is less important, but the context may be helpful.

I had been at my company for a year. None of my co-workers knew about my anxiety.

I was diagnosed with generalized anxiety (GAD) and panic disorder several years earlier. I had tried several medications, with little success, and had been through 2 years of cognitive behavioral therapy (CBT). The therapy made a big difference, but I was still struggling day-to-day.

By all accounts, I was an externally calm, personable, and productive person at work. But really, I was just adept at hiding the tension inside. I made it through most days with white knuckles and gritted teeth, on the job and off.

The event that brought things to a head was an upcoming week-long conference across the country. A 6-hour flight. A week of meetings, presentations, and additional travel in a city I’ve never been to. Early mornings. Late nights. Dinners with co-workers and clients. These circumstances seem unremarkably benign, but those with anxiety know.

I felt stretched so thin already. The upcoming conference was a gauntlet of anxiety triggers — a week-long panic attack waiting to happen. The few positive anxiety management techniques I had at the time seemed like no match for the situation. The positive routines I had been building into my day would be disrupted.

Moreover, I had just started seeing a new doctor who recommend I start a new type (and class) of medication. The conference came up on relatively short-notice and I was already a week into a new prescription. So far, the new medication only seemed to aggravate my anxiety symptoms.

It wouldn’t be the end of the world if I missed out on the conference work-wise, but I did feel like I was letting my team and boss down by not attending. I also felt like I was letting myself down by avoiding an opportunity to face my fears. Worse, I wanted to go. I liked my job. Before anxiety, this was the type I thing I would jump at. But now, I felt outmatched.

Anticipation of the conference wore me down at work even further. I avoided the conference planning sessions and deflected questions related to my attendance.

Maybe I could just not show up at the airport? Or, maybe I could make up some excuse? Yeah, I probably could have, but I knew that would only make matters worse.

Hiding my anxiety was not sustainable in the long run. I knew that. In fact, it was antithetical to fixing the problem. I had to take a step forward. Lying would only complicate things. More white-knuckling would aggravate the problem. Despite the fear and all the “what-ifs” swirling around in my head, I knew that total avoidance would be another unhealthy, self-imposed setback. I wasn’t afraid of getting fired, being humiliated, or yelled at. I was just afraid of how things might change.

I made up my mind to tell my boss about my panic attacks and anxiety disorder.

Before heading out for the day, I found my boss and said, “Hey, do you have 15 minutes to chat tomorrow? I have a personal issue I’d like to talk to you about.”

The wheels were now in motion.

I waited until the end of the day for two reasons:

Perhaps I could have just sent an email on its own, but I felt I owed my boss a one-on-one meeting. After all, we had to talk about it sometime. More importantly, I felt that I would benefit from having this conversation in person. Regardless of the outcome, I knew that talking about my anxiety with another individual face-to-face (a non-professional) would be an immensely positive step forward. I also needed some time to get my thoughts together.

Sending an email in advance of the scheduled meeting allowed me to get out everything I wanted to say in a clear, coherent fashion. I had no idea how to begin, but I sat down that evening and put pen to paper.

I read and re-read my email a dozen times, hovered over the Send button, then re-read it again. I decided not only to tell my boss, but also CC her boss as well. I didn’t want my boss to feel like I was making my secret her secret. At the time, we did not have a HR rep at the company, but if we did, I would have CCed them also.

I finally hit Send. This is what the email said:

Thanks for taking the time to chat tomorrow. I appreciate it.

This is a challenging email to write for a couple reasons, and I hope I properly articulate myself. So, I’ll just try and dive right in.

Several years back I was diagnosed with a condition called “generalized anxiety with panic disorder.” I take medication and work with a therapist each week.

Admittedly, I am overdue in talking about it with you. It can be a difficult thing to explain and is somewhat embarrassing.

This past week I began seeing a new doctor. He has me switching medications. This involves an adjustment period of getting off one medication and starting another. Each of those steps can take about 2 weeks. During that period I will likely experience an intensification of all my symptoms: nausea, light-headedness, and others. These come in waves that can last for extended periods of time that can be very disruptive to me personally.

This doesn’t interfere with my coming into the office or getting my work done on a day-to-day basis. I don’t need any time off. But, I do have some concerns about traveling to Boston for [our upcoming conference]. That’s what I want to talk to you about.

I’d like to add that we have a great work environment and you have exceeded all my expectations as a supportive team leader. Job related stress is not an issue. Unfortunately, these symptoms are ever present to some degree – even if I was kicking back on a beach. It’s my job to successfully navigate this challenge each day, but the change in medication has me particularly concerned about traveling.

I appreciate you taking the time to listen.

Immediately after hitting Send I felt better. The meeting tomorrow was no longer loomed so large. I took action, and I felt good about it.

That night, I received an email response from both bosses.

Paul (my boss’ boss, the CPO of the company):

Thanks for the email and for letting us know. Please let us know what we can do to make this as easy as possible for you.

I realize that was incredibly difficult for you to share. We’re here for you and please don’t worry about [the conference].

An hour or so later, I received a second email from Alex.

This is just to you…

In no way am I trying to trivialize your condition, however I wanted you to know that you’re not alone. I can understand your hesitation in telling me.

Heading into my senior year of college I started having severe anxiety attacks. Completely out of the blue. These attacks were crippling and being a senior in college I felt extremely isolated and very broken. I turned into a hermit fall quarter. (Well a hermit or DD depending on the night.) It wasn’t until I had an episode that called for an emergency trip to our campus health center that I realized whatever was causing this disruption in my life simply would not go away.

After 4 appointments, I was diagnosed with severe ADHD and social anxiety disorder. It’s been an emotional journey ever since. Most college students would be thrilled to be diagnosed w/ ADHD (the extra test time, the focus-improving meds). I wasn’t. I was mortified. It took several conversations with my mother for me to start my dysfunctional relationship with a litany of medications. Antidepressants for the anxiety, other medications for the ADHD, etc.

Most people think ADHD is simply being distracted. Yes that can be part of it. However severe cases call for consistent therapy to manage the side effects. Sleeplessness & social anxiety happen to be my two red flags. I simply can’t shut down sometimes.

I would fall off the wagon in complete denial, have an episode, then get back on the medication. This continued for several years.

Two years ago, I found a great doctor in San Francisco and I no longer feel like a flawed individual. The good news is, for the first time since being diagnosed I feel ok about my condition. Maybe turning 30 did it. Who knows. Apparently I don’t compartmentalize like others and I still have to cope with this everyday. I can now manage the anxiety without medication for the most part but ADHD will always be a part of me.

I’m telling you this because feeling vulnerable at work can be tough however you should never feel isolated or embarrassed. I understand that it’s not caused by one event. Or work. It’s just you and sometimes life can be inconvenient. You can always talk to me and be honest.

I scrolled to the end of your email immediately in fear that you were leaving our team.

Set yourself up for longterm success. If you need to work from home while you acclimate to your new medication it’s completely fine.

Get that [project we were working on today] done though. 🙂

I replied back to both:

Thank you both for your emails. It means a lot. I appreciate it.

Paul, I will follow up with Alex tomorrow, but I just wanted to loop you in as well.

And, I sent another email just to Alex:

Thanks for sharing and offering your support. It really does mean a lot to me.

I CCed Paul because I didn’t want to drop this on you and feel like you have to keep it a secret. I’m open to talk about it – and that goes both ways. I can obviously empathize with your experience. I don’t actively try and tuck my condition away from people. I just don’t usually opt to bring it up. Some people have an easier time understanding that than others. Most people perceive me as a pretty calm person, so it can be a difficult conversation to start.

I take my work seriously and always want to contribute to the team in every way that I can. It can be frustrating when this condition gets in the way of my job.

This is something I have worked on for a long time. For me too, this started around my senior year of college. I’ve worked on things steadily since then and have been able to improve significantly in a lot of areas.

I will let you know if at any point I need to work from home, but I honestly don’t anticipate that being the case.

We can chat more about it tomorrow.

Thanks again for your email and support.

The next day my boss and I had our meeting. But, everything was already out on the table. We went out for a cup of coffee and talked for an hour.

I did not go to the conference. It was the right move at the time, but I have been to many since.

Being straightforward with my boss immediately had a positive impact on my day-to-day anxiety and, long-term, this step forward set me on a trajectory for a life where anxiety lives within my control.