Drinking coffee was like dumping kerosine on my smoldering anxiety. I knew it, but I didn’t want to stop.

For years it was,

Four or five cups every day.

I’ve had diagnosed Generalized Anxiety (GAD) with Panic Disorder for years, but I kept up the coffee. 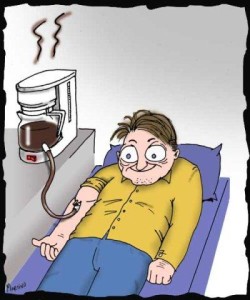 Let me tell you something you already know: caffeine does not mix well with anxiety. I knew it. You know it.

The first time I went to the doctor because of a panic attack, the first question she asked me was, “What’s your caffeine intake like?” It’s literally the first thing they ask you.

Caffeine was not the cause of my panic attacks, but it made things worse. If I was close to the edge, coffee nudged me closer. If I felt stretched thin, coffee stretched me further.

In the back of my mind I was always aware that coffee was aggravating my anxiety, but only in retrospect did I realize quite how much it was making me restless, irritable, tensing my muscles, disrupting my concentration, and jacking up my heart rate. I was wired all the time. The up, followed by the down, wreaked havoc on my mood. I’d take another sip.

There are so many mysterious elements to anxiety – the triggers, the roots. It can be a complex equation.

In the early days of my anxiety, everything seemed like a mystery. Goddamn, why am I so anxious? Why can’t things be like they used to? Why am I afraid of everything?

I was doing all the other things the doctors said: eating better, meditation, exercise, trying medication after medication, the list goes on.

Yet, here was this one concrete thing – this one element to the algorithm I could eliminate that would make a real impact on my day-to-day anxiety level. I could check the research for myself.

I sat there in my underwear hearing the same refrain from a half dozen doctors over a half dozen years and I didn’t take their advice to heart.

Mixed in with the rapid heart rate and jitters was feeling of guilt with every sip. I knew I wan’t doing myself any favors. But, I kept drinking the coffee.

Of course, there were no shortage of coffee-pros for me to rationalize my habit:

Coffee helped pry me out of bed in the morning and propel me to work. In the afternoons, it would keep me going. I enjoyed the taste. Fixing a cup, or going down to the corner cafe, was a nice respite from whatever I was working on. On cold days it warmed me up. It was a pleasant habit, as habits go.

I liked drinking coffee. I enjoyed effects of caffeine just like the other 5 billion humans who consume it on a daily basis. It’s the most widely consumed psychoactive drug in the world for a reason.

Coffee has no shortage of well-documented health benefits to further my rationalization. A few cups a day improve memory. It has been shown to prevent Alzheimers, heart attacks, and diabetes. It can enhance athletic performance and detox the liver. People who drink coffee live longer, dammit.

When things got really bad, I’d occasionally throttle down my coffee intake, but eventually, I always slipped back into my same routine.

Here’s How I Finally Cut Back

Eventually, I reached a breaking point. Something had to give. I was willing to try anything.

I approached cutting back on coffee as long game. If I had tried to go cold turkey, I would have failed.

If you’re considering a life with less coffee and less anxiety, here’s how I got started:

This might seem counterintuitive if you are attempting eliminate coffee your diet altogether, but I found it helpful to put an end date on the calendar.

If I had started out with the goal of never drinking coffee again, I wouldn’t have stuck with my self-imposed program. Indefinite abstinence can set you up for failure.

Gauge yourself and pick a time frame that’s reasonable. Go for a month, or go for 5 days. If you slip up, start your countdown over. If you slip up a few more times, you should consider reducing your timeline.

Once you achieve your goal, make an honest evaluation about whether you’re seeing the results you wanted.

My first goal was to cut my consumption in half – down to two cups per day (from my usual 4 to 5).

Setting lofty goals has its time and place, but in this situation I chose to keep my regimen slow and deliberate.

Also, I’m not saying you’re addicted… but maybe you are. Caffeine withdrawal can cause a whole litany of unpleasant symptoms. If the reason you want to stop drinking coffee is related to anxiety, go at it slow.

“Small wins fuel transformative changes by leveraging tiny advantages into patterns that convince people that bigger achievements are within reach….“stupid small” steps work better for me than larger goals.” – Charles Duhigg, The Power Of Habit

Limit Your Consumption To A Specific Time of Day

Wandering over to the coffee pot was my default reaction to any kind of sluggishness, boredom, or break in the action. Setting a time window for coffee helped break that habit.

I set the window for my first cup between 9 and 10am. I would have my second cup any time  between 1pm and 3pm.

Routine and eliminating options are key components to making a habit stick.

We’re living in the Big-Gulp era of coffee. A 31oz Trenta cup from Starbucks holds an entire bottle of wine, with 5 ounces to spare.

Many a time I would find myself standing at the cafe counter gauging my energy level and impulsively bumping up my small order to a medium, or my medium to a large.

Stick with one size, preferably a small or medium, and don’t go for the impulse upgrade.

I’m all for reusable travel mugs and thermoses, but if yours holds a fish tank worth of coffee, it might be time to put it on the shelf.

There coffee drinkers, then there’s tea drinks. It’s like cat-people and dog-people. The world has drawn a line.

Fuck that. I drink both.

There’s no reason you can’t still have a hot drink 5 times a day if you want, just make it something other than a coffee.

Just about everything has less caffeine in it than coffee. A 12oz cup of coffee has about 150mgs of caffeine in it. A Red Bull has 80. A Coke has 34.

To start out, I substituted black tea (40 mg), oolong (35mg), or green tea (25mg) for the afternoon coffees I was giving up. True, I was still consuming caffeine, but this substitution helped me develop a taste for tea when I was previously lukewarm on it.

After achieving my first 2 week goal, I put further restrictions on my caffeinated tea intake.

Of the non-caffeinated variety I like chamomile, ginger, and mint.

Don’t Drink On An Empty Stomach

For me, coffee was frequently a breakfast substitute.

I found that just a bite or two of food in the morning helped me supplement the energy boost I’d  become so dependent on. The same thing was true in the afternoons.

I made it a rule to always take a bite before before I have a cup.

I was a mindless coffee drinker. I barely tasted it. Drinking a cup coffee became mechanical instead of a sensory experience.

Sure, I loved the smell and taste of coffee, but after that first sip my mind always went somewhere else. Before I knew it, my cup was empty and I was ready for another.

Taking just beat to enjoy each sip prevented me from gulping and actually made me want to drink less.

Speaking of mindfulness, as I cut back, I took time to notice the effects of caffeine’s presence and absence.

When I felt the rush of energy after my first cup, I took note.

When I became jittery after my second cup, I took note

When I got tired toward the end of the work day, I took note.

The reason I was cutting back on coffee was to reduce my anxiety. Noticing the positive effects of not drinking coffee motivated me to build on these small wins. When I noticed the negative effects coffee’s absence, I found another way to manage that feeling. For example, when I noticed I was tired at the end of the day, I’d eat a handful nuts then go for a walk around the block.

You don’t have to meditate or be a zen master to be in tune with caffeine’s effect on your body. I put a blank post-it note on my desk as a reminder to ‘check-in’ throughout the day.

“The is a secret for greater self-control, the science points to one thing: the power of paying attention.” ― Kelly McGonigal, The Willpower Instinct

I was cruising right along with my new coffee-reduction regimen when a major deadline at work smacked me in the face. I was working late into the night and I could feel my 9am deadline staring me in the face. I broke my own rules and bought a coffee — a large coffee.

As I blew the steam off the rim I thought to myself, “Who am I kidding? I can’t keep this up! I didn’t even make it 2 weeks. I have no self control. I am a total failure.”

That cup didn’t really even help me get my work done. I ended up finishing up my project in the morning.

Slipping up really wasn’t that big of a deal. But what was a big deal is that for a second, I thought about calling the whole thing off.

Don’t let a single slip-up throw you into a mini shame spiral and kill your progress. It’s a long game.

Each day’s practice does some good, and if you slip and fall off your diet or exercise program or mindfulness practice, all that you have learned before is not undone; it’s still there in your brain waiting for you to get back in the saddle.” ― Richard O’Connor, Rewire

I drink one 8oz cup of coffee on my way into work, 2 hours after I wake up and have breakfast. Mid-morning or mid-afternoon I limit myself to one cup of caffeinated tea. For the rest of the day I drink as many cups of decaffeinated tea as I want.

This seems to be the right level for me. Eliminating coffee was not a cure-all, but it had a tremendously positive effect on my daily anxiety level. I was doing a lot of other work to manage my anxiety, but slowly, the panic attacks began to ebb. Caffeine was factor. Starting small and building up new habits through repetition helped me stick to it.

If you have anxiety or panic attacks at work, and find yourself still guzzling coffee by the gallon, start slow, and give what worked for me a try. You have nothing to lose. 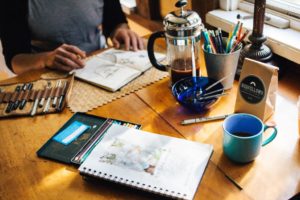 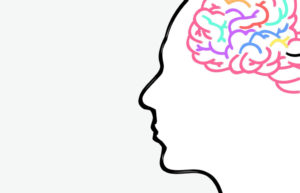 Understand and Master The Brain Chemicals That Cause Anxiety 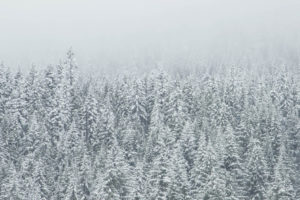 A Mind of Winter is My Anti-Anxiety Mantra 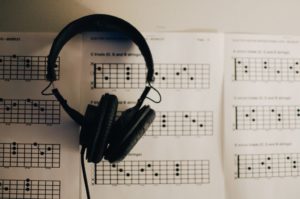